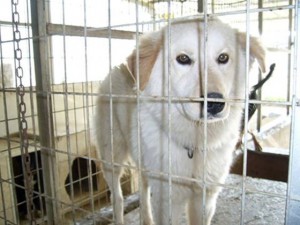 In April 2015 Jan Appleby, who re homes dogs from Cyprus, was looking for someone to adopt Veronica who looked like a big fluffy teddy bear. She’d been abandoned in Cyprus and was becoming more and more depressed in a municipal pound.

Given her coat she was going to swelter in the heat of the Cyprus summer so Karen Elliott decided to adopt her. She was duly collected having been flown in to the UK and transported to Durham.

Karen says “They warned us that as she was coming straight from the pound she could still have fleas, so I took some treatment with me when I went to collect. On checking her over we realised that it wasn’t fleas she had; she was riddled with ticks and that was the first job we had when we got her home, to find and remove them all”.

Like most Cyprus rescues, Veronica is the most mild-mannered, loving dog you could ever want. She has her daft half hour with Karen’s other rescues and though she is the largest by far, she is the gentlest.

Karen says “My 3 Cyprus dogs have had such a rough start to life but you wouldn’t think it as they are the most loving dogs ever.”