Sadly Timmy was attacked by a snake on 10 August and he died almost immediately.  It is not unusual to hear of snake bites in Sri Lanka but it is so sad that Timmy was so unlucky.

WECare are so appreciative of our help with him and everything we gave helped him immensely to be a happy and loved dog in his short life.

His story remains below as a testament to him.  The team at Jacana have pledged their continued support and will look forward to meeting another dog soon (albeit virtually). 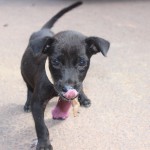 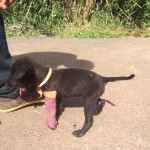 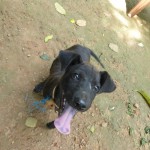 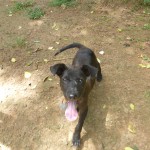 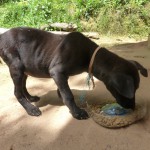 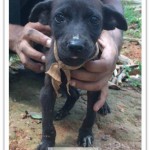 Tiny Timmy was dumped near a pre-school in Kalukatiyawatta in the south of Sri Lanka on the 8th of June, 2015. He had been found limping around the streets, dragging one of his front legs behind him.

On examination , it became apparent that he had severe nerve damage in the top of his front right leg, meaning he didn’t have control over it and couldn’t use it at all. We applied a splint in the hope that the nerves would regenerate and checked on Timmy every few days.

At the end of June, however, we began to panic as Timmy could not be found at his regular spot at the pre-school. It turned out that Timmy had managed to find himself a home and we were thrilled! He had invited himself to live with a very kind, but extremely poor, family in a tiny one-room mud hut. As the family had very little money to spare, Timmy was receiving a lot of love and attention but not many of the essentials (food, healthcare etc) and was looking a little worse for wear.

We appealed for sponsorship for Timmy’s ongoing costs and, thanks to Sue Nuttall at Jacana Limited, we have been able to provide him with two nutritious meals of puppy food a day, as well as monthly flea and worm treatments, and all of his essential vaccinations, including vaccinations against rabies.

On our last visit to Timmy, his improvement was remarkable! He bounded up to greet us, and he couldn’t have looked happier with a full tummy and a shiny coat! The nerve damage in his front leg is no longer, due to the splint, and he was running around very happily using all 4 legs! He was very pleased to have visitors, as he ran between us and jumped up at everyone, begging for attention! Such a little cutie and a very, very lucky boy to have a family in Sri Lanka as well as an adoptive family in the UK.

Timmy has an extremely bright future ahead of him thanks to everyone at Jacana Limited.