In April 2015 Karen Elliott was asked by Jan Appleby to foster a small black dog. The back story is very sketchy but he was so terrified in the pound he would not come out of his little wooden box.

Given she already had one rescue, and had another coming over she was a little hesitant to agree. But she didn’t want him to miss his flight to the UK and agreed to the temporary fostering. 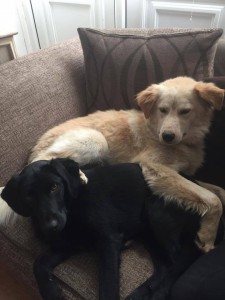 He arrived in the first week of May 2015 and took to Karen’s daughter, Georgia straight away. Karen is now a ‘failed fosterer’; she says “within an hour of getting him home we knew we could never let him go!” Shadow now follows Georgia everywhere (hence his name – he was originally called Ewor). Karen says “He’s such a loving and gentle dog but if you don’t give him attention he’s quick to give you a tap on the leg with his nose as if to say “I’m here”; a throwback to his neglect in the past perhaps and his desire never to be left again.

Karen’s third rescue, Veronica, arrived the following week and it was then she found out that they had been in the pound together for a long time. They are best friends and are always together, especially cuddled up on the sofa.