In December 2013 Karen Elliott’s sister was visiting from Cyprus. Karen had just had to return a dog she had been fostering for 2 years and she was devastated. Her sister mentioned that there were always homes being sought for dogs currently in Cyprus and so began Karen’s exposure to the abuse and neglect that so many dogs endure in that country. 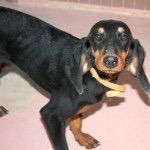 On searching the web, she came across Flower who was only about 8 months old and had been found abandoned in a remote area. She was being cared for by Cyprus Dogs Rehoming Association. Karen says “she was such a beautiful dog but has such a sad face – I couldn’t stand the thought of her being in a kennel any longer”. Flower duly arrived in Manchester on 26th February 2014. She was so terrified when she came through customs that Karen had to crawl inside the flight crate to get her out.

She was found to gun shy in Cyprus and is still very fearful of load noises, so it looks as if Flower was discarded because she failed as a ‘Hunting Dog’. The fact that she still submits herself immediately at any rapid or unguarded movement is testament to the abuse she received as part of her ‘training’, especially having failed. For all that, she shows no aggression and by nature is very submissive and gentle and loves to be petted. Karen says “Flower is still a very nervous dog after all these months; we hate to think what she went through, but she is a joy to have”.

You can see how nervous Flower was in the kennel in this video.